There is a lot of nuance to talk about here. As such, the wording in this article is very specific and there are no hidden implications at all. When I say "s4", I am referring to a series/pool 4 card. And s3 or s5 should be self explanatory from there (I hope!).

Players that had a CL <1006 when Collector's Tokens were introduced

We'll start with the basics. A person who started at or after release and perhaps did not go too hard (on spending and/or playing). As such, said individual had a CL less than 1006 when the Collector's Token patch hit. Why 1006? This image explains why: 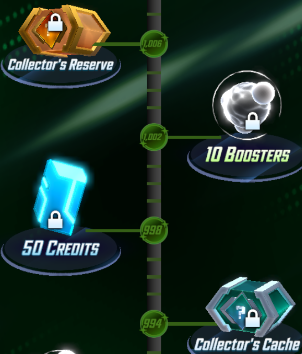 As you can see, 1006 is the first "Collector's Reserve" that a player earns. If you hit this first reserve AFTER the Collector's Token patch, then your account is "fresh" as far as tokens are concerned.

Before we look at the specifics for the card box, let's make sure it is very clear that when we look at an unopened 4-pack, each of the 4 reserves has a 25% chance of being each of the above box types. However, once we've opened 1 or 2 of the reserves, we now have better knowledge of what the next couple reserves will contain. After we've opened all 4, the next 4-pack is reset and shuffled. Pretend you have the 4 aces from a normal deck of playing cards As you pull the cards out 1 at a time, you start to have a better clue what's coming up next (or how likely it is to be a certain card). This is the best analogy for how this works!

To make things more confusing, however, it turns out that we have a series of ten 4-packs we consider all at once. To continue with my card analogy, pretend that you have all the non-face cards (A, 2, 3, 4, 5, 6, 7, 8, 9, 10) of all 4 suits. That's 40 cards (40 reserves analogy). We take the 4 aces, shuffle them, then put them in an envelope (unmarked). Then we take the 4 twos, shuffle them, then put them in an envelope. We repeat this for all 10 different numbers. We now have 10 envelopes (4-packs), each with 4 cards. We shuffle them up and pull out 1 envelope. From there, for each Reserve, we get to pull 1 card. We call the Spaces the Card boxes, the Clubs the Collector's Token boxes, the Hearts the Currency boxes, and the Diamonds the Cosmetic Boxes.

And the big truth - the Ace of Spades is your s4 card, always. If you pull that in your first 4-pack, that means you have to do 9 more 4-packs before you even have a chance to get another s4 card - and realistically, even when you get to that fresh 10-series, the Ace 4-pack could be near the end.

Now, if you open a reserve that is supposed to have a card, and there are literally no unowned cards of the appropriate series/pool, you get 200-600 (400 average) Collector's Tokens instead. So an s3 box if you are s3-complete? ~400 Tokens. An s4 box if you are s4-complete? ~400 Tokens. Does this mean it's better to spend Tokens to be s3 complete so you can get those sweet ~400 Token boxes? NOPE! Spending 1,000 tokens specifically to then be able to later gain ~400 Tokens is just throwing ~600 Tokens in the trash. If ya want the card to play with it, power to you - buy that card! But if you just want to "speed up getting ~400 Tokens", you're just robbing yourself of Tokens.

What if you don't want to track this math? No problem, read on below and you can go check where you are at any point in time!

Players who do not know how "fresh" their account is

Either you don't want to track it, or you have no clue which reserve was your first after the Collector's Token patch hit. No problem - we can get into the files and dig out precisely where the game has you at.

How to figure out where you are in your s4 path

On a Windows10 PC, using Steam:

You go find the RewardState.json file at the following location (assuming your username is Mike and it's on the C drive):

On an Android phone, connected to your PC:

You go find the RewardState.json file at the following location (by default with an S22 anyway):

On an IOS/MacOS device...

You're looking for the same file:

On IOS...my understanding is that they just won't let you peek into these sorts of files, sorry!

Once you've found your RewardState.json:

Scroll down until you find something that looks like this:

The "CollectorsReserveCacheCardsBox": is the important part. After that, you should have anywhere from 0-10 lines (I'm actually not sure if the important part is there at 0 lines). In the image above, you can see that the 2 boxes I have opened on my account are both "Not Series 4". This means that 1 of my next 8 card boxes WILL be an s4 pull. If my next card box has an s4, this file will update and it will say something showing that a Series4Box was found. This tells you precisely where you are in your current 10-series, and thus, roughly where your next s4 card will be!

Relating this back to Collector Token strategy

Perhaps not understanding this made my Token strategy a bit more confusing. But now ya have it. When the downrank happens, you can utilize this knowledge to have more control over what you do. It is worth mentioning at this point in time, that there is a very valid reason to not save "forever". For example, I am at 50 unopened reserves currently while being s3-complete. When the downrank hits, only 1 card will be entering s3 that I need (I have 3 of the 4 that are moving into s3). Meanwhile, Shuri is moving to s4 and I'd love to have her! So I will be s3-complete after opening 4 reserves most likely. But with Shuri fresh into s4 and likely another 2 months off from entering s3, perhaps I open more reserves with the hope of pulling her from s4. While saving reserves ends up with the most Tokens in the long run, eventually there is a reason to simply open reserves to get cards (and actually turn them into the ~400 Tokens potentially). Still, waiting through the latter half of the month and opening early makes a lot of sense to me.

First off, I want to again put my voice out that I believe Featured/Hot locations need to change. The ladder being swarmed by decks that abuse these locations and make the games feel overly identical for 3 of the 7 days in a week is not good. The locations, to me, are supposed to bring variety to games. These systems to the exact opposite.

I am once again going to say that I think Hot Locations need to die fully (weekend events that use old locations) and Feature Locations (mid-week events that use new lcoations) should change significantly. I love the idea of new locations being shown off a bit more, be something that people will get to experience...but it should be something like a 10-15% chance to show up, so that players do not go spend 48 hours playing nothing but decks that abuse the location. I want to see new locations with normal decks that people actually play rather than what is happening now.

Next, snap.fan will be hosting some casual tournaments as soon as battle mode releases and we have a little more information. I do not have a lot to share at this point, as Second Dinner has not shared much yet either. We plan to release a premium option for the site (use your imagination here, but yes, ad-free should be included as well as more features available), and for our initial casual tournaments (no entry cost), we think it'd be cool to give away free premium as prizes once it is available. I wish I could say more, but nothing is solid enough as of now to say much more. Furthermore, we are hoping to have a live tracker app in the near future that will hopefully sync with what the current tracker already does, so look forward to that as well!