Second Dinner posted their current plan for moving cards down from Pool/Series 5 to 4 and Pool/Series 4 to 3. You can find the full article from Second Dinner here. There is actually a LOT to discuss here. Before we get to specifics, it is worth highlighting that this is currently planned for January 31st (but of course, delays can happen). One other noteworthy comment from said article is:

"However, there are currently two cards that we do not plan to drop down a series: Our favorite 6-Cost supervillains, Thanos and Galactus. They’re just too dang epic."

Who knows what others may join them! There is now a precedent for this moving forward at least. 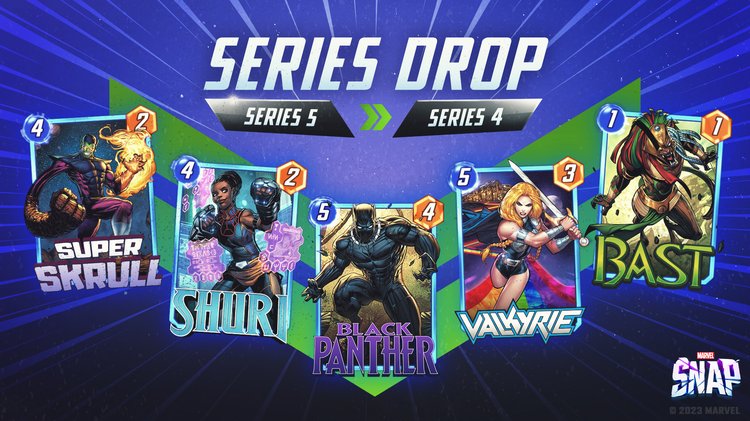 Five cards are moving from s5 to s4. The most obvious/expected one is Black Panther, November's season pass card. Assuming this timeline holds consistent, we have season pass cards being exclusive for 1 month, s5 for 2 months, and s4 for some number of months. If we use this full announcement to attempt to predict the future, we would expect season pass cards to remain in s4 for 2 months as well.

The other 4 are Super Skrull, Shuri, Valkyrie, and Bast. This leaves ONLY Thanos and Galactus from the initial 6 s5 cards remaining in s5. Past that, we have only Darkhawk, Sentry, Knull, and Silver Surfer remaining...meaning there will not be 4 cards +Season Pass for the end of March, if downranks are monthly. If we expect to get 3 fresh-to-s5 cards per month, then the Season Pass card can simply occupy the 4th slot monthly, and the 5 cards moving this month is a simple fluke to get us to an equilibrium point. 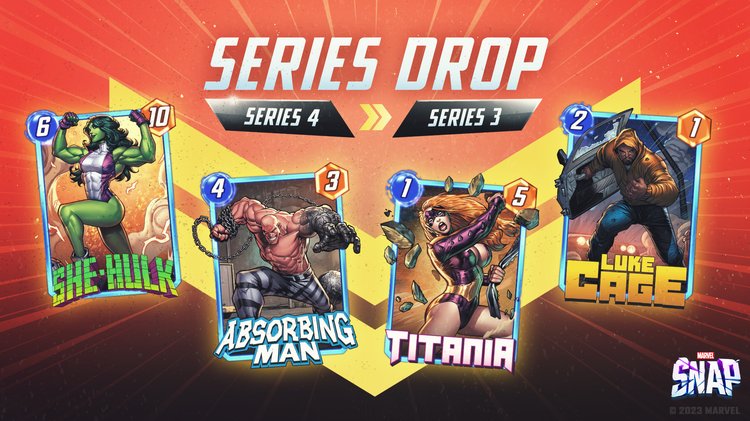 There are four cards moving from s4 to s3 this month. She-Hulk, Absorbing Man, Titania, and Luke Cage. This leaves 6 cards in s4 (Agent Coulson, Attuma, Helicarrier, M'Baku, Maria Hill, & Orka). Looking forward to the next 2 months, we should expect 4 of these to move down at the end of Feb, then 2 of them plus Black Panther plus one of this month's s5 to s4 cards at the end of March.

This is where it gets interesting to me, personally. There are a ton of strategies here that one can use, some of which get close to personal finance retirement planning, in all honesty! Personally, I truly believe that Second Dinner is doing significant planning around/for "dolphin" players - that is players that are buying the season pass monthly, almost like a subscription. All of the following is assuming a full s3 collection. Second Dinner did mention that they are specifically looking to make the experience better for players that are not s3 complete, but we have to wait to see what they do there.

For said dolphin players, s5 is always 1 card smaller than for a free-to-play (f2p) player, which is more than fair. Second Dinner does need to have some form of income, and I think this is a more than reasonable path to that end. Past that, if you decide to open all your caches, you can expect to receive roughly 6,000 Collectors Tokens. This would let you purchase either 1 fresh s5 card or 2 s4 cards. In the meanwhile, you would unlock all fresh to s3 cards every month. This effectively means you are never caught up, but do have the agency to pick up whatever cards you want, so long as you are conscious with your spending.

For a f2p player, you will likely receive all the fresh downranked to s3 cards, but it will require some amount of diligence on quests/etc. Realistically, it should be more than possible to keep up with the dolphin player on actual collection rate of the fresh to s5 cards. The end result is basically giving up an additional 400 Collectors Tokens on top of what you're already giving up within the pass itself.

For whales, you are paying for getting more cards earlier. If this is your jam, I will never judge you for it. Again, SD needs income for everyone to be able to enjoy the game. Power to you. Galactus and Thanos seem to be the best token purchases for whales, as they are going to reside in s5 for an extended amount of time. Fair warning to all potential whales though - if you will be upset when other people get most the cards on the collection track a couple months after you, perhaps you should rethink your decision. Go in with the understand of what you are paying for.

What about competitive integrity? Well, I currently think it is fine. I mentioned before that I believe that SD is almost catering to the dolphin players, so revisiting that - I think that is a fine place to be for ladder play. Ladder is and will never be the most competitive environment. If you want to play with a card for a month, then buy it at a relatively low cost...if you don't, then that is your decision. Not all season pass cards are even good enough to be considered playable, also.

Let's now imagine that at some point there is a tournament structure, be that hosted by SD or by a 3rd party fully. So long as you have some advanced notice and have some amount of Collectors Tokens saved, you should be able to build whatever deck you want to via the token shop. If this is your plan, there is significant benefit in spending as few tokens as possible in the interim time - wait for them to down rank and save up tokens, so that if there is a summer tourney for example, you can buy what is good within the meta at THAT point in time. Between buffs nerfs, and inter-meta play, the relative strength of a card will change as the meta does. Saving tokens for a point in time when you need to be competitive is a strength.

Going a step further, there is what I'm going to call a "retirement strategy" (going back to my personal finance analogy). This currently works, but who knows if it will change in the future. What you can do is save your Caches on the CL track and not open them. Once a downshift in cards happens, open enough so that you unlock every fresh to s3 card available to you, then go back to sitting on them. Avoid buying cards as much as possible, as described above. The goal of doing this is so that you open as few s4 cards as possible. Instead, you wait for them to downrank to s3 and then instantly grab them. Over time, your Caches should actually increase, and as such, your potential Collectors Tokens will increase (almost like a retirement account!). At the very start, it may honestly feel a little bad...but I would say in a month or 2, you will start to see just how much you have available at your fingertips, and can make decisions on the fly as needed.

This request was made of me on discord - to have a "buy list" for people to read. I am honestly against this. As I mentioned above, the meta shifts enough that cards move in and out of favor over time. Even if I (or anyone / any other site) tell you what cards I think are the ones to buy, who knows how long that will last, and even if that means they are worth it. Infinite can be hit with all sorts of strategies. I truly believe that the best move is save tokens unless YOU think a card is worth buying and want to buy it. Personal opinion is as, if not more, important than some tier list. She-Hulk is a good card, but I find her boring and not fun at all. Meanwhile, I love Bast. If you are not sold on buying a card yourself, I think you are very likely to have buyers remorse, and saving tokens is the best strategy overall...so save! And if a card is extremely busted and it gets nerfed...remember, the shop says "NO REFUNDS!", so how will you feel if that happens?

In conclusion, this is about what I (and others) expected. It seems fair and reasonable, honestly. It is a little sad that I will not play with for months after their release, but I will have the agency to buy any card at all that looks cool to me! And as time goes on, my purchasing power to that end should grow (because let's be honest, most cards are not that interesting to me!).

At the end of the day, this system does exactly what SD wants. We will all have the same "core collection", and we will have agency to augment it with cards we like a bit earlier. We make the decisions to buy the cards we want to play with, and thus the meta will have some amount of diversity. I truly think this is good. Already, I've seen posts on reddit and discord about people complaining that cards they bought are downranking (and I understand, truly). To me, this just affirms what I've said within this post. Save your tokens unless you really want a card.

P.S. - Hot and Featured Locations really need to change IMHO. Altar of Death is up featured right now, and the high rate of showing just means people make abusive decks that make playing the game less fun. I love the fact that the location exists, but not that it shows up this often. It existing means in every game, both players see the location(s) and have to start to plan how they want their future turns to play out with the normal deck. During these times, the ladder becomes far more repetitive as people use strategies to abuse the locations. I think Hot Locations should fully die (Hot are the old ones on the weekends.) Featured Locations should show up at a rate of say 10%? (New locations, mid-week) That way, everyone does see the locations, but they are infrequent enough that people are encouraged to see the new locations with their normal decks.