The Snap.fan deck tracker can now be downloaded and used! The app that we've had available to track games (winrate, cuberate, card playrates, etc) is now merged with the deck tracker if you are playing the Steam version on Windows. There are no plans currently to extend this part of the app to other platforms, sorry. The download for the app can be found on the website at this link, or by using the navigation menu in the upper right corner as can be seen below.

To install it, you likely need to close to old tracker first. Once you do, you'll need to right click on the Snap Sync icon on your taskbar to bring up the following menu: 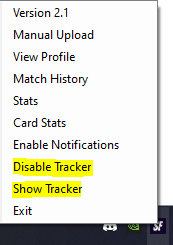 On this menu, you will need to click both "Enable Tracker" (which will then say "Disable Tracker" as it does for me in the screenshot above) and "Show Tracker". Once that is done, you simply need to start a game to have it load. There may be an message showing on the small page until you begin your first game, but once you do, the tracker will look like this: 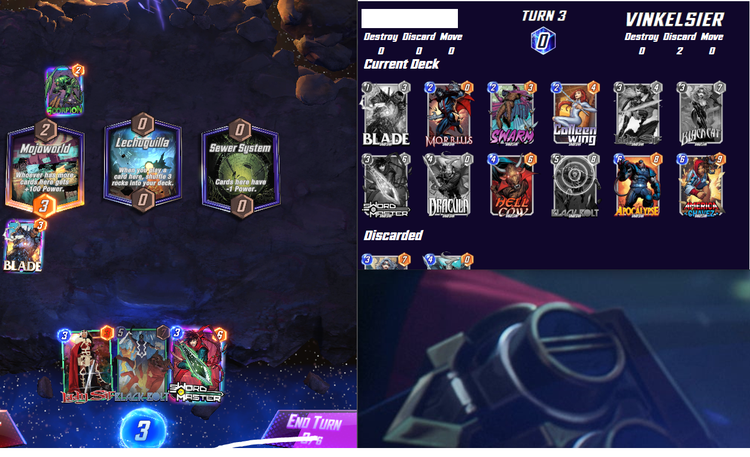 The left portion of the image linked above is simply the game itself. The app does not have an overlay at the moment, but it is something planned for down the road. On the right, you can see what the tracker app looks like as of the time of writing of this article. This is an image from the beta verison of the app - so it should begin to look better and better over time. Right now, it is not very customizable. The size is static. To see more information, you scroll down on the website that is loaded there. As mentioned, there are plans to improve the interface - more compact options, resizability, and more. Feel free to stop by the Snap.fan community discord if you'd like to share any suggestions that you'd like to see!

Let's talk about everything in the tracker image above. In the upper left, you will see your opponent's name. I censored that within this image (for obvious reasons). On the right, you will see your own name! Under each players name are 3 categories - Destroy, Discard, and Move. These track the game (and if there is an edge to be gained, it's due to these being tracked and not having to be remembered). This section is simply a counter, but further information is displayed down below.

Between the 2 player names is the current turn and the current cube stakes. These stakes do not show the stakes from a snap that has not been called yet. This means if your opponent just snapped, it will remain with the rate it had until the turn passes and the stakes actually increase. The screenshot above says 0 rather than 1 simply because it was from an earlier test build.

As we move our eyes down, we can see the 12 cards within our deck. Some are greyed out, some are in full color. The ones in full color are the cards remaining in our deck. This is just a Quality of Life (QoL) thing so you don't have to sit there and try to remember what cards are still in your new deck you've been trying out! It will also track cards being added to your deck (Rocks, Vibranium, cards cycled with Lockjaw, Mjollnir, etc).

At the very bottom, you can see the "Discarded" zone (there is also a "Destroyed" zone, but the deck I was using for the sake of this screenshot does not destroy cards!). While this will help a little if you are running a discard deck and want it to help you track that...I need to say, there have been numerous times that I've queued up for a game, stepped away to refill my water, then come back to see Sokovia was the first location and it discarded a card (for both players). It was quite frustrating to not have that knowledge as the game progressed! Well, this will solve that!

Now, there is also a "Move" tracker in the top portion, but not a zone for it. As far as I know, there is precisely 1 benefit for this, and that is Nightcrawler. I'm sure we've all had a game where we wondered to ourselves, "Did Nightcrawler already move this game?" Well, it can answer this question...though, it can get a bit more complicated if there's also a Vision and Polaris or Aero on the field. There's a chance this part gets changed or cut, but it's there for now.

The future (or present even!) for this app

Here's a short list of changes within the app (from the screenshot I used above). The first 2 have already been done, but they are different from what I showed prior.

Wait, what's that - Snap.fan tournaments? Yep, they are a thing. Details are not fully ironed out as of yet, but they are in the works and we hope to be hosting some tournaments as soon as we can once battle mode goes live. Stay tuned for more information about that as it comes!

In the meanwhile, I hope this app helps you out! I know I love the fact that it makes it far easier for me to multitask.