As the first season since global release comes to a close, we look into the future to see what awaits us...but before we do that, a fair warning for players fresh along with the global release (Oh, added fair warning, there are some big spoilers at the bottom of this article about new locations!):

If you are already at season pass level 50 or above, each level gives you one Season Cache, with the following possible rewards: 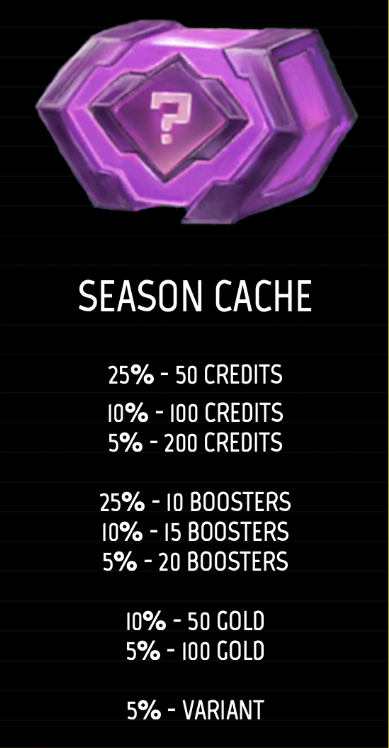 So, perhaps some new players want to know, "What specifically do I get if I purchase this season pass?" Assuming nothing is changing last moment, here's what you can expect:

To begin, you get Black Panther's base card. On top of the base card, the season pass will, as usual, come with 1 specific variant for him as well as 1 (also pre-determined) variant for each of this month's 2 "supporting characters." For this season, those 2 are Okoye and Nakia. Of course, this assumes that you get your season pass leveled up high enough to claim said rewards. If you do, you can likely also expect the normal other gains. For the same cost that you would pay for 700 gold in the shop...you get the listed card (Black Panther) and variants (Black Panther, Okoye, Nakia), as well as 900 gold, 400 credits, 2 random variants, 2 avatars, and some boosters (weighted towards the aforementioned cast). Please realize this is just the paid gains on the season pass track - there are still 2 additional random variants, regardless whether you purchase the pass or not - listing "2 random variants" here is on top of that, bringing you to a total of 4.

So, you want to buy the season pass, and want to know what to do with Black Panther. Let's look into that! First, we will look into what we can do with him if we are still in pools 1 and 2.

In pool-1, there are only 2 cards that have any signifcant synergy with Black Panther. The first is Forge, as Black Panther will have the +2 power before he goes to double his power. The second is Odin, giving Black Panther a second doubling.

There is really only 1 other card that is worth mentioning within pool-1. Captain America. I do not believe Captain America will work, as if we play Mr. Sinister into Captain America's lane, the copy will not have 3 base power, but rather copies at 2 power, then received the captain's aura. That said, I am mentioning it is worth keeping in mind.

Before I begin, I truly think there are stronger things to be done within pools 1 & 2, but hey, we play the game for fun, and it's fun to use a cool new card!

I am a big fan of consistency. This brings me to looking to make a deck that still gains value from Forge, Okoye, and Odin, even if we miss Black Panther. Now, the astute reader will note that Nakia wasn't mentioned in that list...sadly, that's because she's already been cut. She's just too unreliable and honestly, weak. I did just talk about fun, and maybe you just saw Wakanda Forever and really want to include our Wakandan ladies, 'cause that's cool and fun. In the following list, feel free to cut Scarlet Witch for Nakia, if you so desire.

Now, let's go over some of the inclusions!

Black Pannther, Forge, Okoye, and Odin were all listed above.

Angela is perhaps the strongest card in pools 1 and 2. She is also a good, proactive early play (note: If you have Okoye and Angela in hand on turn2, play Okoye first so you get more value from her!).

Killmonger is included as a tech choice against Kazoo (Kazar) decks. Nova was added as a fine early play that gets added value from when we play Killmonger.

Mister Sinister is an additional way to secure value from Forge and Okoye's buffs. If both of said buffs hit him, he will copy his 5 power to his clone, resulting in 10 power for 2 mana.

Jessica Jones gives us a reasonable way to get power into a second lane. There is some conflict with Forge here, but there are times that she will just be better because we do need to win 2 lanes.

Just like we have Mr. Sinister to give additional synergy with Forge and Okoye, we include White Tiger and Iron Heart to provide additional synergy for Odin. There will be times that we need to take the Tiger into Odin playline and completely ignore Black Panther.

Finally, Scarlet Witch is great to have for location control. She requires more skill to use well, so feel free to cut her if desired, but she is very strong.

Things are a bit crazier in pool-3. There are some cool and weird interaction that we can try to take advantage of. The first of such interactions is Wong, Black Panther, and Arnim Zola.

There are plenty of ways to try to fit this into a deck. A good start is to look for other cards that benefit from Wong and/or Zola, just incase we do not pull off our combo. White Tiger and Dr. Doom are both good with Wong. We could also add Odin in to finish a second combo of Wong, White Tiger, Odin, and if we really want to get spicy, could play Iron Heart before Wong, expecting to trigger her 4 times when we play Odin (that's 24 power on turn-6, even if we had an empty board when we played her as a [3/0]).

Ultimately, a solid deck ends up looking like this:

So we have the combo mentioned above (sorry Iron Heart, ya didn't make the cut), along with Doom, Tiger, and Odin. Thor and Electro are our best 3-drops available. Electro accelerates us into our "good cards" if we miss Wong (a turn-4 Leech can be crippling for our opponent - imagine removing the abilities on both Patriot and Mystique in their hand). Enchantress is here as a tech option for plenty of decks within the meta. Jubilee is included as another good turn-4 play, as we really do not have bad cards to pull within the deck, since we have no 1-drops or 2-drops. Finally, Devil Dinosaur is basically just a 5/13, as we only ever plan to play cards on turns 3, 4, 5, and 6. In a normal game, we typically draw 9 cards across the game. If we play 4 cards as mentioned, that leaves 5 in hand, resulting in 13 power for our Dinosaur. If we draw Mjollnir for one of our final cards, that could end up costing 2 power for the Dino, but a 5/11 is still solid. It is also another viable Zola target (Thor is as well, IF we draw Mjollnir - it will buff all Thors on the field, twice if played into Wong's lane).

This deck is actually quite solid. I was not impressed by Miles, and said as much in my article a month ago...people experimented across the past month, and while some people still like Miles, I believe the majority of the top successful players agree that he is just lackluster and not particularly good. That said, this deck existed before Black Panther and just ran Gamora in that slot.

Enchantress and Leech are both tech cards and can be swapped for other options, if desired.

The first week of the new season, we have our mid-week Featured Location of Shuri's Lab. It clearly doesn't take much to see how this provides Black Panther with exponential scaling.

The weekend following Shuri's Lab, it should come as no surprise that we will get Wakandan Embassy for 48 hours. Again, this clearly helps Black Panther.

Just looking at the new featured locations after this, in order of appearance, we will see:

Vibranium Mines - I talked about this one in the Miles Morales season article!

Throne Room - This should be an aura, not a permanent change to the card, and I think will not impact the card until AFTER their On-Reveals occur (this matters for Black Panther).

Lamentis-1 - I think I love this location. It gives you all the information for your deck up front, and you can plan accordingly. It should favor players that have the ability to plan well, and also makes it easier to know when to retreat.